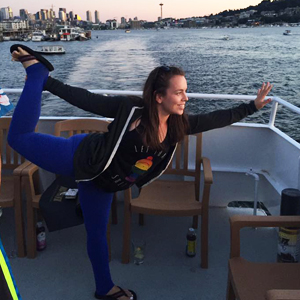 Melissa’s yoga journey began in 2013 shortly after having her first child. She was tired all the time, stressed from the pressures that came with being a new mom with a high pressure job, and found herself putting her personal health at the bottom of the priority list. After her first class at Get Zen she was hooked! Within a few months of regular practice she felt healthier and stronger than ever, both mentally and physically. Yoga taught her about the importance of self care, being present, living in gratitude, acceptance, and letting go of expectations and resentments. She decided she wanted to share these revelations with the world! She completed her 200hr RYT training at Get Zen Hot Yoga in 2016 after having her second baby. In 2018 she became a certified Kidding Around Yoga teacher to further her practice with her own children. Now she strives to teach yoga to all ages, from crawlers to seniors. Melissa is a firm believer that yoga can change the world, one peaceful person at a time.

"Love it! The instructors are all awesome, and it's a great way to exercise and calm your mind at the same time."

"I love GET ZEN! Great teachers and a beautiful clean studio to practice in! Thanks for making hot yoga enjoyable!"

"A positive encouraging experience every class. The instructors are genuine and helpful in this safe and loving studio. I came back after a Groupon because my mind and body are at one here. I am so grateful for this happy place!"