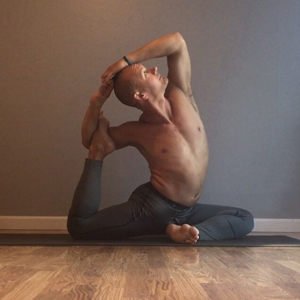 Jeff was introduced to yoga in 2005, and it quickly became part of his home work out routine. Doing yoga off and on for 6 years, he knew he liked it. But, it wasn’t until he stepped into a yoga studio in 2011, that he discovered what it meant to Practice yoga.

Jeff’s asana practice deepened as he began to connect with a community, and all aspects of being a yogi. Finding focus, strength, healing, balance, and peace, he was officially hooked.

In 2013 he decided helping others with their practice was the next step in his journey. Receiving his 200 hour RYT in March of 2014 from The Forces of Good at Fruition hot yoga ( now known as Open Up TT ).

While leading a class, Jeff aims to provide a safe, positive, fun, and empowering experience.

"Love it! The instructors are all awesome, and it's a great way to exercise and calm your mind at the same time."

"I love GET ZEN! Great teachers and a beautiful clean studio to practice in! Thanks for making hot yoga enjoyable!"

"A positive encouraging experience every class. The instructors are genuine and helpful in this safe and loving studio. I came back after a Groupon because my mind and body are at one here. I am so grateful for this happy place!"